Nearly one year on from the riots, and with the eyes of the world turning to London for our moment of Olympic glory, we have fantastic news to report.

All your generosities at the time of the riots raised so much money that we were not only able to refurbish Aaron's barber shop and bolster him a bit with his loss of earnings, but we had enough left over to help others in the Tottenham community as well. It was Aaron's wish, (and our delight) that we support projects for young people, showing that youth are far from the enemy, but the future that needs nurturing.

We have worked with the fabulous Kay Horne of Business In The Community (BITC, and pictured below with Aaron) to find recipients for the money that were appropriate. Kay has been tirelessly supporting the regeneration of Tottenham since the riots, and her BITC role will take her through until March and hopefully longer. She's a smiley face that the people of Tottenham have come to trust and love, and almost as much of a local celebrity as Aaron!

So it was with great pleasure yesterday that we met with Aaron at the shop, and hosted representatives from the projects we have chosen to benefit from the funds - sharing more than £10,000 in fact. They are: 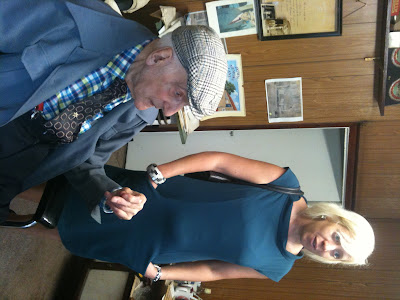 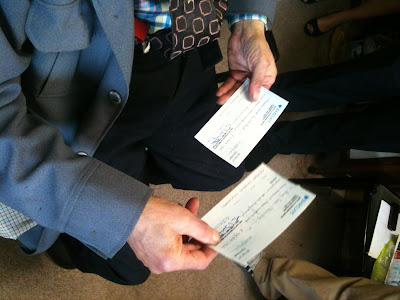 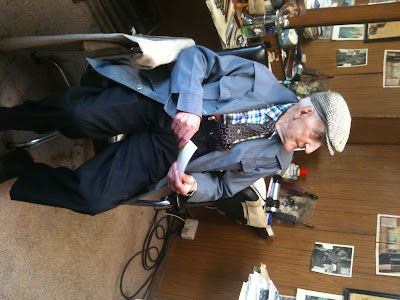 The Highway Youth Club at Bruce Grove Youth Club - this is a Dinner Club that feeds disadvantaged kids in the area and keeps them off the streets with loads of forms of entertainment. It makes sure they are set up properly to embrace their futures. Aaron spent his entire childhood in a youth club called Oxford & St. George's in the Jewish East End, that provided everything for needy families, and he has a strong belief in it giving him the best start in life and skills he needed to survive.

The Dandelion Project is a young citizens' journalism project, which we chose because of the media connections to the Keep Aaron Cutting Project. We wanted to show that youth and social media could be used positively for good, and the Dandelion Project has the same aim. Their kids are going to come down and do a piece on Aaron. (And they also shot some great photos yesterday, so we'll upload those here when we get them.)

The People's World Youth Club is an organisation that helps kids focus their energies through creativity and self-expression & exploration of the world and its cultures. We were very attracted by a project that helps kids focus their talents around working together to create. People's World are hard at work on their Carnival float right now, which will be creatively themed around the riots of last year.

And next week, Aaron will attend a lunch at a week-long event being held at his beloved Spurs football club for young entrepreneurs, run by NTYE, which is the Network for Teaching Young Entrepreneurs - the organisation gives young people business skills to work for themselves, as Aaron has done since he was 12 years old.

As you can see, Aaron was on great form, speaking Ghanian with Pastor Alex from Highway, and full of stories to relate to Fiona, the young journalist from Dandelion. And he's definitely looking forward to visiting Spurs. As ever, the shop is open for business from 6am-12:30pm Monday to Saturday, and business in Tottenham is still slow (you might have seen Aaron on BBC's The One Show on 20th July, with other Tottenham traders and residents), so we'd encourage you to visit for a haircut. You'll be very much welcomed, without a doubt.

Thank you once again to everyone who made this wonderful conclusion possible, we are very proud of London and the world for their efforts, and equally so the little corner of Tottenham. 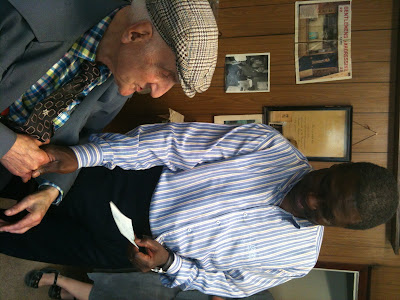 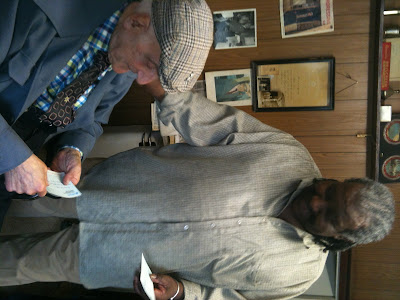 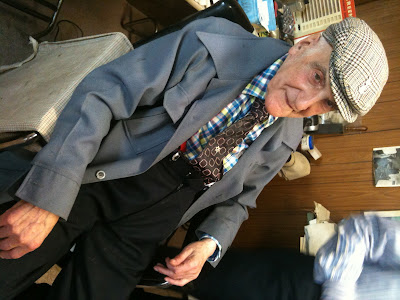 Posted by bjornandsophie at 03:26 9 comments

Hello everyone,
Aaron’s shop is now back up and running. To celebrate we popped over with a few glasses of wine and mince pies. The shop is looking lovely and Aaron is extremely happy with his warm and welcoming new work space that you’ve all helped him get back.

This will be the last post from the Keep Aaron Cutting team, so we’d like to take the opportunity to thank everyone involved. Diamond Build did an amazing job, Aaron’s nephew Eddie Biber who has helped enormously, and thank you to everyone at BBH who started the project and worked for months to get it where it is today. 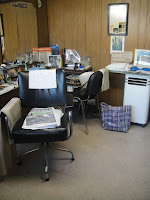 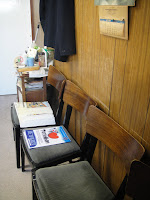 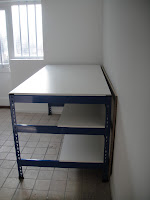 Lastly to those of you who donated, thank you so much. Over two thirds of your money rebuilt Aaron’s shop which is keeping him safe, working and telling his stories.


Aaron believes that young people can do great things if given the chance, this is why he has decided that he would like a portion of the money raised to go to the Bruce Grove Youth Centre, around the corner from the barbershop. He benefitted from a similar local club in his younger days and feels today’s youth deserves that opportunity too. 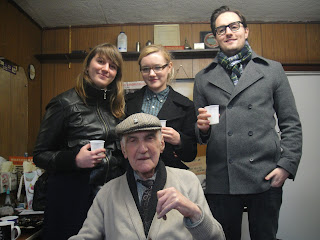 We wanted to show something good could come out of something bad, and we think with your help and Aaron’s, together we have. Do pop in for a haircut now and again.
Merry Christmas and Happy Hanukkah
The Keep Aaron Cutting Team
Posted by bjornandsophie at 07:16 10 comments

Hello Everyone,
Well, the lovely guys from Diamond Build have finished up the work on Aaron's shop, so we went down to visit him on the weekend. Monday to Saturday, Aaron is ready to cut hair from 6am, and we found him giving Bruce, a long-time customer a very tidy trim. Aaron's a happy chappy, despite a bit of a chesty cough, and we settled down for a cup of coffee and a good old chinwag in the refurbished shop.
The place is looking really great. It's certainly still Aaron's long-standing barber shop, but it has had a deep clean, a great lick of paint, new lights, new lino on the floor. He's got a new Gentlemen's Hairdressing sign out front (we tried to save the old one, but rot and the dreaded asbestos reared its ugly head...) and a snazzy roller shutter to keep him secure, plus new gates on the archway to take you around the back. And out the back of the salon space it's also clean, fresh, tiled and ready for Aaron to use as storage, or even have dance parties to the strains of Max Bygraves... There's new water plumbing for all those friends old and new dropping in for teas and coffees, and we're keeping the biscuit tin topped up with Rich Teas.
One of Aaron's barber chairs broke during the refurbishment, so we're on the hunt for a lovely vintage replacement, and we'll be putting back other vintage barber's kit that Aaron lost during the riots - like his cotton wool and singeing stick holders. And we're getting a new set of visitor chairs, because there've been so many bums in the shop in recent times that most of them seem to have bust! We hope for lots of people coming in for cuts in the future - one of our team can report her 2nd fringe trim from Aaron was very fine indeed. 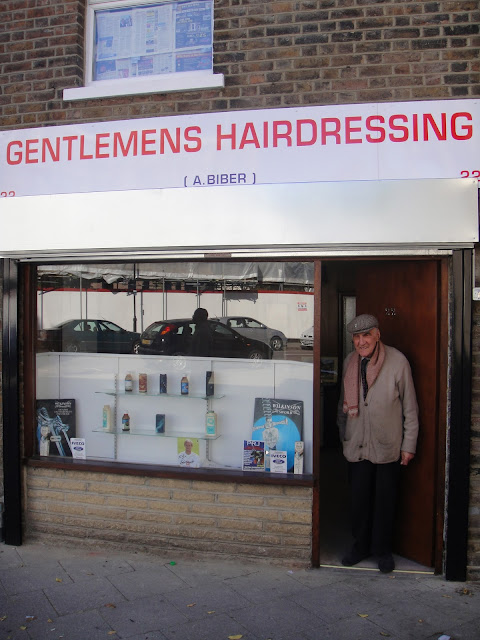 Stay tuned for the final touches to this heartwarming story, and thanks for all your support as ever. We couldn't have done it without you.
Thank you Everyone,
The Team
Posted by bjornandsophie at 02:06 3 comments

Hello everyone,
Just to keep you updated on what’s happening down at the barbershop. The builders have been busy working in the back room, and have created a more secure space for Aaron, with a new back gate and windows. 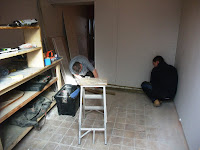 Aaron has been keeping them company while they work, regularly supplying them with cups of tea and old stories. And in true Aaron Biber style, he’s still working hard and lending a hand. 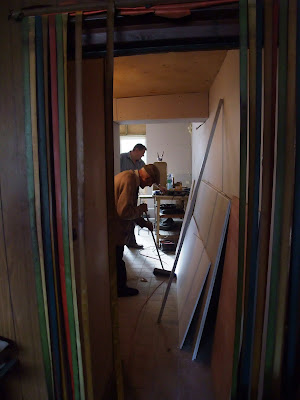 Thanks for checking back,
Björn and Sophie
Posted by bjornandsophie at 04:36 6 comments

Hello everyone,
The work has started on Aaron's shop. The lovely Tottenham builders at Diamond Build will be hard at work over the next couple of weeks restoring his beloved barbershop. Keep checking by to see the progress.
Thanks for your support, 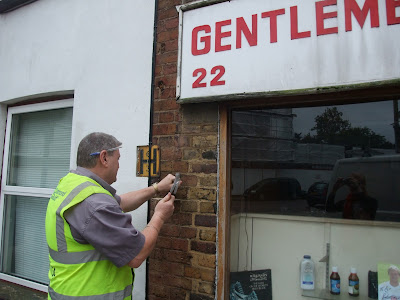 Posted by bjornandsophie at 06:34 2 comments

Thanks for checking back. Things are moving along nice and steady. Our priority is obviously Aaron in all of this and it's been quite a month for him. We've been taking small steps with the refurbishment so as not to overwhelm him.

So far we’ve paid for the replacement glass in the front window, a new door, hair dryer and wall clock. Sorting out the interior now begins in earnest so we can fit security shutters and secure the building.

We've taken some time to find a good local Tottenham builder, step forward Diamond Build, and we are just finalising the quote with them as we speak. Aaron and his nephew Eddie are involved in each stage of the process and we are making sure it’s going to be exactly the way he likes it.

Once this has been complete we will also have a decision on which charity the remainder of the fund will go to. We've had lots of great ideas so thank you. Aaron will make the final decision.

Thanks once again for all your support and be sure to check back in a couple of weeks to see what we’ve done to the shop.

Björn and Sophie
Posted by bjornandsophie at 09:19 4 comments

We are interns at BBH, a London advertising agency, and were touched by Aaron's story and wanted to help. We wanted to use this opportunity to show that youth and technology can be a force for good.

We are currently part of the first round of BBH Barn's interns.

All the money donated will be given directly to Aaron to help him get his Barbershop up and running again.

Thanks for your support,

Read more about the Barn and the Project